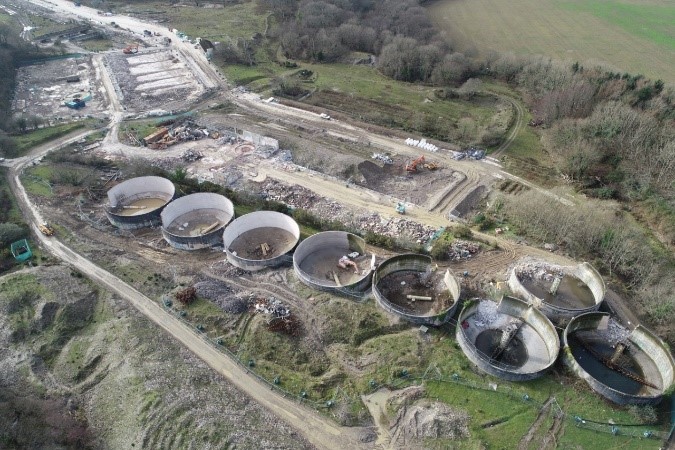 Cognition Land and Water has been appointed by Homes England to carry out demolition of remaining buildings and structures at the former Imerys China Clay site at Marsh Mills, Plymouth. Works started in March 2019 and were proposed in order to remove the health and safety concerns associated with the buildings and contaminants such as Asbestos Containing Materials (ACM) and Naturally Occurring Radioactive Materials (NORM) for the new housing development.

The site had a list of environmental constrains from Tree Preservation Orders, protected species (bats and badgers), nesting birds and reptile habitats as well as a population of approx. 150 deer, all directly impacting the daily tasks conducted on site.

Cognition appointed Ramboll consultancy as licenced ecologists to provide expert guidance and supervision throughout the works. As several buildings listed for demolition were also designated bat roosts, Cognition also worked closely with The Environmental Partnership (TEP) who owned the bat licenses for the site, assisting them with implementation of bat mitigation measures before and during demolition. As part of bat mitigation licence, TEP had previously overseen construction of a bat barn on site to provide replacement roosts for lesser and greater horseshoe bats. To encourage the horseshoe bats to use the barn, TEP additionally recommended several enhancements for the bat barn and the surrounding area.

In May 2019 Cognition has been instructed to erect a new dormer access on the barn’s roof, construct an additional day roost in the immediate proximity of the barn, install a solar heating system in the loft void and new safety door to improve the safety and prevent people breaking in.

TEP regularly monitored the bat populations during the demolition and remediation work. The baseline surveys showed small numbers of brown long-eared and soprano pipistrelle bats in the bat barn, however, no evidence of horseshoe bats having used the bat barn was found. During the survey in July 2020 and after the enhancements were completed, TEP confirmed at least two lesser horseshoe bats have found their way into the bat barn as a result of newly constructed dormer access. They have also confirmed they have been using the loft for daytime roosting. Additionally, TEP confirmed a small lesser horseshoe maternity roost to be present in the security building, which is the first time a maternity roost has been documented since the former owners Imerys completed partial demolition under a previous bat mitigation licence in 2008.

This is not just a good sign for the horseshoe bats’ future, but it also provides evidence that the implemented interim bat mitigation measures and Cognition’s mindful approach during the demolition and remediation works have been successful.

Cognition is continuing to assist with further refining of the solar heating and other improvements to the bat barn until the end of the project in autumn 2020.